How To Remember A King: Notes on Little Richard

The king is dead. But there is no new king to wish long life. For years, in their ripened ages, Chuck Berry and Little Richard tossed the crown back and forth. But now that they have both perished, there are no more heirs or descendants to claim worth. We have lost something so monumental and so extraordinary that any distant, would-be relative could never match up. The breadth of power contained in these pioneers simply cannot be measured in what we have become accustomed to in our cynical age of data and numbers.

It is not about who sold more records or who had more hits; it is not about who had the closest sound or who had the most followers. It is about the insight, influence, and mastery of concocting and establishing the blueprint of an entire movement. It is about the bravado, the tenacity, the spirit, and the courage to destroy and dismantle all the rules and restrictions that held back a people for centuries. What has been done by these inventors of rock n’ roll is so earthshattering it may take ages for most to even realize.

But the truth is: how could one miss it? How could one miss the glittered, chaotic flamboyance that erupted from one single individual? How could one miss the spine-tingling, mind-bending energy that exuded from one single individual? One would have to be severely disturbed to be unaffected by the magnetism that exploded from Little Richard. As with all greats, he held that impervious ability to draw one in by merely stepping onto a stage or a set. All air and all attention floated his way and stuck within his grasp until he was ready and willing to let it go. He was a firecracker, he was an airplane, he was a volcano, he was a race car.

And it was that delightful realization he had of himself that radiated the brightest. From the moment he burst through the charts with a daring, coded ode to anal sex called “Tutti Frutti,” his specific brand of showmanship, style, and splendor ripped up all that had come before. No one could break his wily confidence and dignified arrogance; how careful he kept his hair and how beautiful he kept his face. The jazz and blues musicians of the previous generation had cultivated personas based on elegance, simplicity, and reservation. But Little Richard obliterated those conventions with a speed and sexuality that practically oozed through the jukebox.

It is no surprise that Elvis’s Brando-of-the-Bayou aesthetic is often credited as injecting sex into the rock n’ roll genre. And truthfully, the hunky hillbilly did bring a certain cinematic flavor that could melt any poodle skirt. However, it was Little Richard who first brought to rock a radical mix of glamour and raunch. If Elvis exuded Hollywood classicism then Richard in his earliest days held a similar torch; his was the black male face as regal and refined as the garish 1950s could desire. Although he shouted and hollered about late night romps in fast-moving vehicles, he looked the picture of cool sophistication.

That marvelous emphasis on beauty always attracted the greatest attention to his sexuality, which is something Little Richard both reveled in and reviled. One may believe this confliction was due to time and place; however, it is impossible to imagine his impact without acknowledging how incredibly radical his charisma and cultivation was. Because black men oftentimes did not see themselves as beautiful in any respectable sense, most entertainers did not trade on their looks. And since, black men had historically been used as sexual objects, there was often a sense of conservatism in how they publicly portrayed themselves. Yet, Little Richard, with his primped pompadour and made-up grill, not only allowed black men to see themselves as gorgeous, playful beings, but he also allowed them to reclaim their sexuality with pride and fluidity. To be open sexually was an affront to the repression that had existed under white patriarchy. It was a badge of honor to explore truthfully and unabashedly. 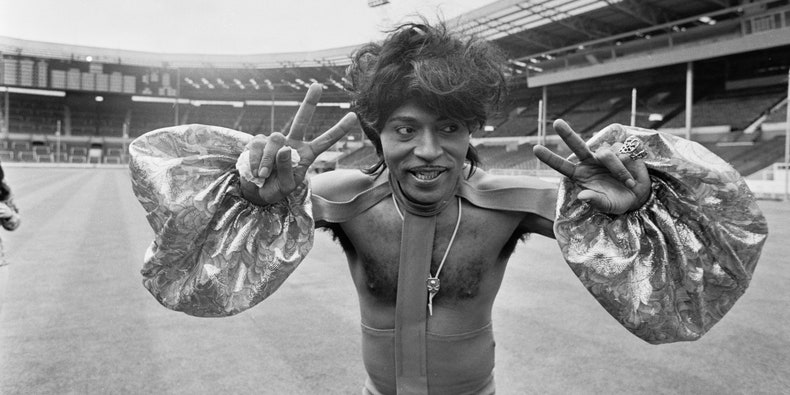 But, perhaps most potently, with that sexual independence came that wily, ferocious wail of a voice. Although often imitated and mimicked, it was not something one could merely achieve and accomplish. The way he screeched, the way he lifted and rose certain words, the way he shook and shimmered—none of that could have come from anyone else but Little Richard. It was the sound of rock n’ roll being birthed, kicking and screaming in a brave new world. It was the impeccable flourish of gospel hymns colliding with the grime of street corners. Whenever Little Richard opened his mouth, it was a call to arms for something cooler, sexier, wilder, and livelier. He seemed to be descending from the heavens at all times, giving new prayers and instructions to follow.

That is not to say that what he mostly sang about upended poetic masters. The root and the rhythm of rock n’ roll never lied in the kind of intricate storytelling that unfolded and became “the norm” a decade after its explosion. It was always about simplicity at its finest: love, death, sex, cars, and dancing, dancing, dancing. And the greatest rock n’ roll records are the ones that distill that formula into their own image, that bring those subjects and feelings to their absolute purest incarnations. And that was what Little Richard excelled at. With those almost incomprehensible bellows, he cut deep into our hearts and made us jump, move, electrify. He did not have to be a wordsmith supreme; he was a saint and guru. As much as Little Richard created the genre, he epitomized it just as seamlessly.

And that may be perhaps the most crushing blow to the death of Little Richard. Because what his death truly symbolizes is the end of an era of reparations, of reclaiming, of reappreciating a movement that had been within the black cultural sphere upon inception. For many, in his later years, he appeared to be more of a sideshow comedian conjuring truths about cultural appropriation and historical revisionism. But his words were never as absurd and outlandish as often portrayed. He was a man who had watched an entire genre explode and take over the world and had barely received credit as a vital and crucial component of its vibrancy. He was seeking respect and seemed to be treated like a gag.

That is not the fault of Little Richard, however. History is often unkind to the vanguards of a certain style or movement. In fact, by the time the British Invasion rattled the world, those black pioneers of rock n’ roll were already being regulated to backseat roles. Many, like Little Richard, were praised by their Transatlantic offspring, and often benefitted from this nod of influence. However, those benefits felt cheap and disgusting, as if a peasant passing a dirty handkerchief to a gilded monarch. Even though he drew attention to this unfairness, respectability was still fleeting to Little Richard and his co-conspirators, creating a growing erasure that saw to inch them out of rock n’ roll scrolls forever.

And that is why we must remember this great figure with the highest of importance. Many have forgotten just how integral rock n’ roll is to the black American cultural experience. Without rock, there would be no funk. There would be no soul. There would be no hip-hop. What has been retrofitted as a white artistic genre was and will always be the product of American blackness. Understandably, the plethora and dominance of white acts makes that reality seem increasingly fantastical. But the roots that have been sewn cannot be cut loose; we have enriched the soil so deeply we are embedded in the earth.

The king is dead, long live not another soul.